Before diamonds became the go-to gemstone in terms of value and stature, pearls very much held this title. Pearls have been considered the jewellery of royalty for millennia, with the first known record of pearl jewellery dating back to 420 BC. The fragments of this piece are on view in the Lourve Museum in Paris and were found in a Persian Princess's sarcophagus. It is thought that Chinese royalty was presented with pearl jewellery as early as 2300 BC. They were also revered in Ancient Roman times, with Julius Ceaser passing a law in the 1st century BC that stated only the ruling classes were allowed to wear the stones.

Pearls are the only gemstone that originates from a living creature. They are a hard, glistening object created in the shell of oysters in saltwater and freshwater mussels as a form of defence. Initially, pearls were considered precious as they were discovered within certain molluscs where an irritant, such as a food particle, had caused the build-up of nacre into a perfect sphere. These pearls had to be dived for and thus equated to finding sunken treasure.
Generally speaking, pearls take between 6 months and three years to form. Natural pearls which occur without human intervention are scarce, which is why most pearl jewellery is made using cultured pearls.

Today, most pearls found in jewellery are farmed or cultured pearls. These are pearls created following the artificial introduction of an irritant into the mollusc, which forms the pearls in due course. Freshwater pearls are also farmed but are usually cheaper as the final pearl is not perfectly spherical like cultured pearls. However, recently modern farming techniques mean less of a difference between saltwater and freshwater pearls.
Pearls are valued by size, colour, shape, lustre, surface quality and nacre thickness. When manufactured into pearl jewellery, pieces with two or more pearls are valued higher if the pearls match each other in these qualities.
Pearls found in different locations have differing qualities. For example, South Sea pearls are famed for their size, while Tahitian pearls are lauded for their size and intense grey-green colouring.

Give the Gift of Luxury Pearl Jewellery

Pearls make a wonderful gift, as they are such a go-to timeless classic. Pearls are recognised as the birthstone for June, with bracelets and earrings featuring heavily on gift ideas for those early summer birthdays. They are also the gemstone associated with 3rd & thirtieth wedding anniversaries.
Due to the colour, luxury pearl jewellery makes a perfect wedding day gift for a bride too, as they will match the traditional white or ivory wedding dress well. However, as natural creations, pearls are porous, so they must be explicitly kept away from water and perfumes as the latter can significantly decay the pearl.

New Cavendish Jewellers are specialists in pearl jewellery, offering a solid range of pearl strings, pearl studs, pearl pendants & pearl earrings. Our range uses cultured pearls, freshwater pearls, South Sea pearls and Tahitian pearls set in precious metals. We have something to meet every budget, and offer jewellery on finance so you can spread the cost over several months to make it more convenient.
Browse our range of pearl jewellery online or visit us in-store to discover our stunning collection of pearl jewellery in London. 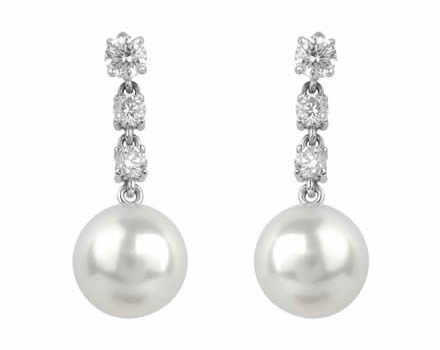 Be it online or in-store, New Cavendish Jewellers carries a wonderful variety of earrings set with Pearls. We specialise in earrin ...Read more 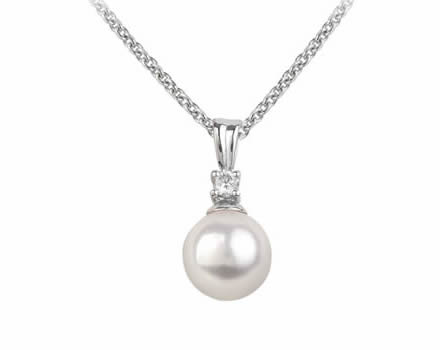 At New Cavendish Jewellers, one can find a huge variety of pendants set with Pearls in a variety of metals. As we personally curat ...Read more